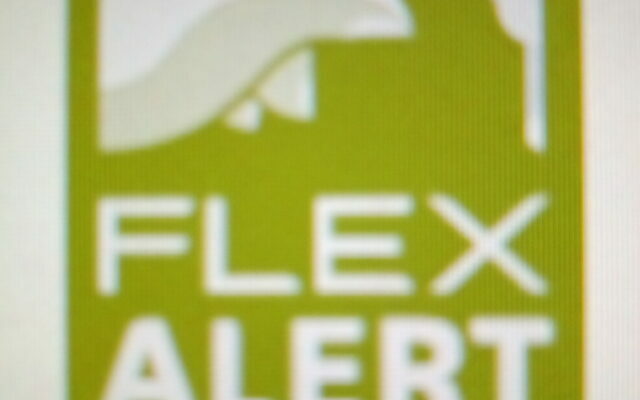 With high temperatures expected around California through the Labor Day Weekend and beyond, the people who run the power grid are not confident they can generate enough electricity to keep the lights on and the air conditioners humming.

So, the California Independent System Operator has called a Flex Alert, urging people to reduce their use of electricity.

The Flex Alert is in effect through Thursday September 1st 2022 but could be extended.

That means turning off your major appliances, washers, dryers, dishwashers, electric car charging stations, pool pumps, between 4 in the afternoon and 9 at night.

Residents of the State of California have dealt with rotating power outages in the past, and is threatened with them again, if they don’t reduce their power use.

In Northern California, residents routinely deal with power outages when Pacific Gas and Electric turns off the power on windy days, when the threat of downed power lines increases the risk of wildfires in rural areas.

With excessive heat in the forecast across much of the state and Western U.S., the grid operator is again expecting high electricity demand, primarily from air conditioning use, and is calling for the public to conserve as much electricity as possible from 4 to 9 p.m.
The Flex Alert was first called on Wednesday August 31st 2022.

Additional Flex Alerts could be issued through the Labor Day weekend as triple-digit temperatures are forecast across much of California and the West.

The Flex Alert for Thursday, Sept. 1 is scheduled for 4 p.m. to 9 p.m., when the grid is most stressed from higher demand and less solar energy. During that time, consumers are urged to conserve power by setting thermostats to 78 degrees or higher, if health permits, avoiding use of major appliances and turning off unnecessary lights. They should also avoid charging electric vehicles while the Flex Alert is in effect.
To minimize discomfort and help with grid stability, consumers are also encouraged to pre-cool their homes and use major appliances and charge electric vehicles and electronic devices before 4 p.m., when conservation begins to become most critical.

Reducing energy use during a Flex Alert can help stabilize the power grid during tight supply conditions and prevent further emergency measures, including rotating power outages.

About Flex Alerts:
A Flex Alert is issued by the ISO when the electricity grid is under stress because of
generation or transmission outages, or from persistent hot temperatures.
View the fact sheet on Emergency Notifications on our News webpage.
Follow grid conditions in real time at ISO’s Today’s Outlook, download the free ISO
Today mobile app, and follow us on Twitter at @California_ISO.

Flex Alert Sign shows a person’s hand, pushing down on an electric light switch to turn the light off, with the words FLEX ALERT on a lime green background.