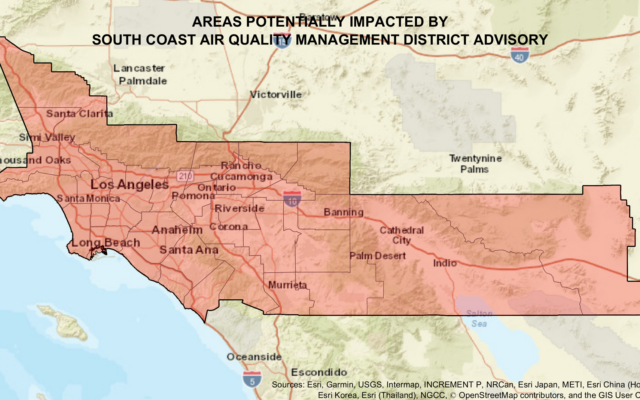 The South Coast Air Quality Management District has issued a Particulate Advisory for the Coachella Valley through Tuesday afternoon July 5th 2022. The Advisory was issued on July 4th 2022, warning of poor air quality due to fireworks.

The AQMD says fireworks are known to emit high levels of particulate matter as well as metal air pollutants, which can contribute to negative health effects.

Due to fireworks related to Independence Day celebrations, the Air Quality Index may reach the Very Unhealthy category or higher from the evening of Monday, July 4th through the early afternoon on Tuesday, July 5th.

Throw in people using personal “backyard” fireworks, and some moderate winds in the desert, and some local areas could have even worse air quality.

Fine particulate matter levels are typically at their highest levels of the year, on July 4th and July 5th.

The smoke and combustion products from fireworks add to the fine particles already present, primarily caused by motor vehicles, as well as ‘fugitive dust’ and industrial emissions. The use of consumer grade “backyard” fireworks can also spark wildfires, which can be a major source of fine particulate matter.

Note: The Coachella Valley has no major manufacturing industries and has no heavily-wooded areas, and is at minimal risk of wildfires on the desert floor.

Breathing fine particulate matter can lead to a wide variety of cardiovascular and respiratory health effects such as heart attacks, asthma,  decreased lung function, coughing, or difficulty breathing and may lead to premature death in people with heart or lung disease.

Here in the desert, from June 30th to July 4th 2022, there were 7 commercial fireworks displays.

The AQMD recommends you avoid burning wood during periods of poor air quality.

Map of Southern California area with bad air quality due to 4th of July Fireworks shows.