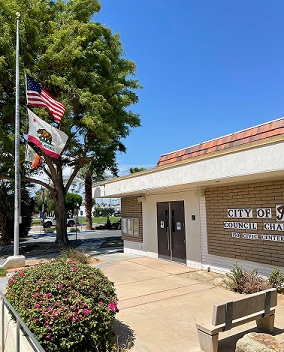 The City of Indio is honoring and fallen U.S. Marine Cpl. Hunter Lopez of Indio.

There is a photo memorial with yellow roses at the large Afghan pine tree on the west side of Indio City Hall.

Everyone is invited to stop by and pay their respects to Lopez through September 11th 2021.

The photo memorial reads “In grateful memory of the service and sacrifice of U.S. Marine Corps Cpl. Hunter Lopez. You are forever a son of Indio.”

22 year old Hunter Lopez was killed on August 26th, 2021 in an attack at the airport in Kabul, Afghanistan along with

12 other members of the U.S. Marine Corps, including two others from the Inland Empire, Lance Cpl. Dylan Merola and Cpl. Kareem Mae’Lee Grant Nikoui.

“Hunter was selfless in his desire to serve his country and in so doing paid the ultimate sacrifice,” said Indio Mayor Elaine Holmes. “Thank you Hunter, and all whose lives were lost,

and all who serve, for fighting to protect our freedom.”

City flags are being flown at half-staff in his memory.

In  Coachella, the City Council is recognizing the passing of U.S. Marine Corps Cpl Hunter Lopez, and sending heartfelt condolences to Riverside County Sheriffs Captain Herman Lopez, Deputy Alicia Lopez, along with their family and friends.

“We are so saddened by this tragic and sudden loss of one of the fallen U.S. Soldiers in the attack in Afghanistan. His call to service at such an early age and his eagerness to serve his country is honorable. He was a true role model for the community.” stated Mayor Steven Hernandez.

Mayor Hernandez also added, “Hopefully with the consent of the Lopez family, the City of Coachella would be privileged to honor Hunter Lopez with a plaque on the “Wall of Heroes” and a soldier banner at Veterans Park.”

Photo from City of Indio CA