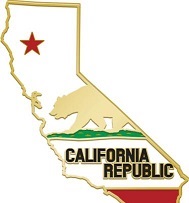 After months of talking about helping Californians shoulder the increasing price of gasoline, state lawmakers in California are taking action.

Democrats in the General Assembly have put together a committee to investigate why gasoline prices are so high in California.

A similar investigation in 2019 led to higher gasoline prices.

There is also a 14.4 cents per gallon state sales tax in California, which is slapped on the cost of a gallon of gasoline including the 18 cent federal gas tax.

There are Cap and Trade fees, Low Carbon Fees, an Underground Storage Fee, and the fee for using the Summer Blend of gasoline in California which add as much as 64 cents onto the price of a gallon of petro.

Map of California, with a red star in the upper left corner, a golden bear in the middle of the map, and the words California Republic on the bottom of the map; Map has green, white and red stripes on the bottom half. Photo from Riverside County Registrar of Voters website